Fanfest Flashback: The Spectacle of Combat

EVE has many strengths, and two of the things it does particularly well are delivering spectacular visuals and providing adrenaline-inducing PvP combat. However, after watching the PvP Tournament Final at this year's Fanfest, it strikes me that these two elements are not happy bedfellows.

Visual
EVE is visually beautiful. With it's myriad of detailed ships and stations, eye-catching weapons effects, it's spectacular nebula-filled starscapes and detailed planets that sweep elegantly by beyond the shimmering warp tunnels, simply travelling around New Eden is a glorious feast for the eyes that evokes the highest of science-fiction ideals.
The promotional videos and trailers that CCP so excel at capitalise on this sci-fi pedigree, with sweeping shots of agile frigate squadrons scything through lumbering fleets of capital ships. Battleship armadas blast thundering salvos across space whilst dreadnaughts reign fire and hell down on planet surfaces. To any viewer, those breathtaking cinematics tease them with suggestions that EVE will provide them with the opportunity to actually participate in exhilarating space combat as seen in the greatest of sci-fi canon such as Star Wars, Battlestar Galactica and Star Trek. 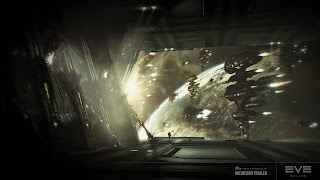 Visceral
Combat in New Eden can be a heart-pounding visceral experience; from the slow build-up of ship selection and fitting, through flying past the aforementioned serene beauty, to hearing the tell-tale sound of a weapons lock and the sudden explosion of light and sound. When combat is joined the heart thunders because, like no other game, this sudden change of pace triggers the primordial 'fight-or-flight' mechanism in all of us. Our primitive hind-brains don't realise there are no longer any sabre-tooth tigers to outrun and so pump us full of adrenaline, increasing our cardiac output and heightening our senses, readying us for a fight to the death.
Whilst sitting at a desk, the muscles aren't utilising this sudden influx of resources, so unless well-drilled, the usual reaction to this physiological surge is panic – the over-oxygenated brain does odd things - but what a rush! Proficient pilots ride this buzz, harnessing it and using it to their advantage. It's little wonder that many of New Eden's veteran combat pilots are prepared to roam for hours in search of this rush, they're armchair adrenaline junkies. 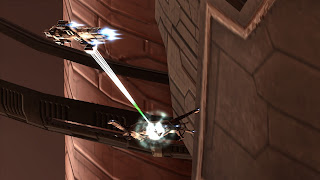 Disconnect
Combining these two elements is surely the recipe for an epic spectacle of orgasmic spaceship carnage, right? Well from what I saw of the Tournaments at Fanfest, sadly not. I'm sure it is a fantastic experience for the competitors, but for the spectator all you can see is a number of small squares representing ships (it is not even possible to discern which team they belong to), some fast-moving 'x's for the drones and the occasional flash of light when something explodes. It was all very turgid and underwhelming.
It seemed clear to me that for the less well-informed spectator to have any understanding of proceedings, the onus was on the commentators to explain what was going on. However, either they weren't entirely sure themselves or they assumed that everyone else already had a grasp on events, because they often meandered off into general discussions about rules, tactics or loadouts in the middle of the 'action'. In my opinion, without any clear visual indicators, they need to be delivering a style of commentary more akin to radio coverage, working from the basis that the listener cannot see anything. Because with the current tournament display tools, essentially we can't. 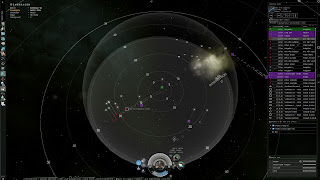 Reconnect
Even with professional and consistent blow-by-blow commentary, EVE Tournaments as an entertainment spectacle are doomed to remain an underwhelming and dull experience for the viewer without a rethink on the presentation. The problem comes back to the user interface; prior to (and sometimes during) the tournament combat rounds, frantic drop-down menu access could be seen being performed by unseen technicians as they attempted to arrange icons in the right place and centre the camera on the correct object. It was clear that they were essentially using the same tools that players have access to, albeit with some extra options.
Surely the technology and manpower exists for a team of 'camera-men' to set up various camera angles from which to view the action, whilst a director ensures that the main feed that the viewer sees stays focused on the action and is relevant to the commentary.
The existing 'advanced camera' options provided by the UI are anything but advanced, but it is at least something to build on. If the camera was instructed to keep a number of ships on-screen (essentially defining the outer extremes of a single 'object'), key combat focal points could be observed much more dynamically. The designers have in essence already achieved the same process in the character creator by ensuring all poses keep the eyes in view. Can this not be done for highlighted ships? Add to this a 'tailplane' view, a turret-cam and a free-roaming camera and suddenly you a suite of camera controls to bring the viewer a stunning visual experience that fully utilises the Trinity engine and brings the Tournament to life.

Lights, Camera, Faction
If CCP truly want to 'evangelise' EVE and convince the wider gaming audience that New Eden is the place to be, this would be a great way to move the current game experience a little closer to the pre-rendered visions that we so regularly get teased with.
Initially, this would enable official Tournaments to become a much more enjoyable experience for the viewer, even those not well-versed in PvP or even in basic EVE mechanics and would therefore appeal to a far wider audience. Furthermore, if released to the user, more sophisticated camera tools would mean a far more cinematic experience for all players, giving rise to more immersive personal experiences, more creative machinima projects and lots of positive free publicity for EVE. Everybody wins.
To summarise; I don't want to watch crosses and brackets any more, I want The Battle of Endor and so does Joe Public. 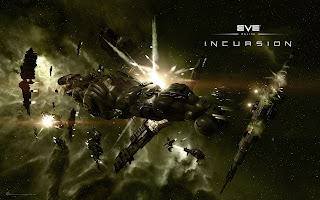