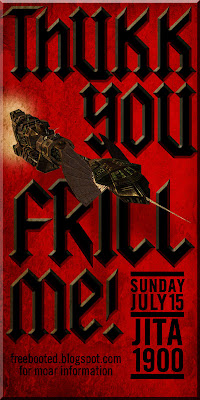 1800 'My Loot, Your Tears' Suicide Raffle in Jatate
1900 General Stabber/Vagabond muster to form the "Frill Me" fleet at Jita Memorial to flash our knickers at the AT10 camera.
1929 "Thukk You" RvB-led Outlaw fleet enters Jita, performs monument alphastrike flyby. Pinata self-destructed.
1930 "Thukk You, Frill Me!" combined fleet departs Jita on Protest March
2000 Rendez-vous with remaining outlaws in low-sec
2100 Fleet arrives in M-MD3B to deliver a sternly-worded letter of complaint to the Thukker Mix CEO.*
2101+ Tea & Biscuits/Death or Glory
2130 Surviving Protesters will head to Delve via Curse and Catch.

*this may involve a degree of carnage. ;)


Please register your support in the community of your choice. Additional events and promotional material will make you shiny.

Like a gentle echo of last year's acrimony, capsuleers have once again been voicing their dissent at changes brought about by the latest expansion. This time it is the removal of the Vagabond's "frill". Chief amongst those protesting is Rixx Javix of Eveoganda notoriety, but there has also been much chatter in Tweetfleet, on the forums and elsewhere. It seems that finding something to rage about is fast becoming a Summer tradition in New Eden, but this time there's a distinctly more festival feel about things.

That's not to say there isn't a point to be made. It would be a magnificent showing of player solidarity if we could get a bit of a crowd together to tub-thump about the needless circumcision of the Vagabond, but equally to celebrate EVE and its communities, and also to remember that 20% of CCP staff lost their jobs as a result of last Summer's mistakes. Whatever axe you've got to grind, bring it along, I'm sure we can blow something up in its honour.

"Disgruntled capsuleers have previously had some success making their point through in-game actions, most notably during last Summer's uprising which resulted in the "destruction" of the Jita Memorial monument.
Shooting a static structure is so last year, but a similar event would have the advantage of showing numbers, being something active and positive and it would also be a talking point.
So how about a protest march?
Thukk You, Frill Me! - The March Against the Vagabond Revisionists
The corporation responsible for the production of the Vagabond is Thukker Mix and their HQ is listed as the Thukker Mix Factory in the null-sec system of M-MD3B.
How about we organise a Stabber/Vagabond gathering one weekend, when the entire fleet will muster at the Jita Monument, but will then take a leisurely protest tour of the major trade hubs, before heading out through low and null to "suicide gank" the Thukker Mix HQ.
This will have the following benefits:

Any takers for a bit of friendly civil disobedience?"

There has  been quite a positive response to this suggestion, so will invest some time into organising this event, but I am going to need some help.

All times above are EVE time (GMT), I picked a weekend evening as I hope that will be a convenient time for the majority of timezones (sorry far-Eastern folks).

I felt a couple of weeks would be necessary preparation time to give some momentum a chance to build and for word to spread (plus that is the only day in the near future where I can play spaceships all day without double-booking or getting wife-aggro). I am aware it coincides with the group stages of Alliance Tournament X, but perhaps that can contribute to the carnival atmosphere I hope we can generate.

I'd be more than grateful for any assistance in promoting and organising this event. Ideas are welcome; I appreciate not every pilot can enter high-sec, so I would like to make this as inclusive as possible. Perhaps there could be some lead-up events over the course of the day before the Jita Memorial muster. For example, some celebrity PvP exhibition bouts, a treasure hunt, or anything else people can think of and are willing to organise. Anything that will encourage folk to put in an attendance for the march itself.

The route should take in a number of high-profile systems, with the purpose being to raise awareness and recruit marchers to the cause before the exodus through low-sec and on into The Great Wildlands. I would like to ensure that a significant portion of the route will be outside high-sec to enable outlaw supporters to be involved.

Edit: To address the concerns of those not able to enter high-sec without consta-warping, how about a display-team-like alpha-strike flyby of the Jita Monument? We could self-destruct a pinata Vagabond at the same time, then they outlaws can lead the high-sec contingent back down into low-sec for the remainder of the march.

Clearly there's little point in being too regimented about what happens once heading for null as there's likely to be some kind of ambush, but it would be great if we could get a swarm of Stabbers/Vagabonds into the target system for a glorious last stand.

So bring your tinfoil carnival hats and a sense of humour and let's get protesting. Spread the word, organise some stuff or just turn up on the night. Let's get the poor deaf little Vagabond his ears back.

[I have replicated this blogpost in the In-game Events section of the EVE forums here. Please feel free to spread the word on other forums.] 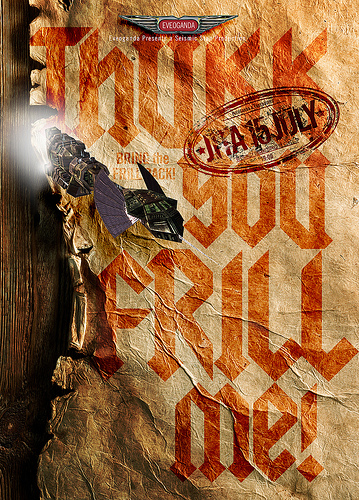